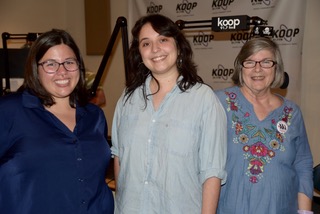 Alice Embree is Thorne Dreyer's guest host on Rag Radio this week. Alice is a longtime Austin political activist and journalist and a Rag Radio regular. Alice's guests are Sarah Lopez of Fund Texas Choice and Cristina Parker of the Lilith Fund. The show focuses specifically on abortion access in Texas as well as other reproductive justice issues. All three guests are highly attuned to the issues of racial and immigration justice and their impact on abortion access. They represent a new generation of leadership in the fight for reproductive justice.
Sarah Lopez is originally from El Paso. Her own experience led her to volunteer at Jane's Due Process before becoming Program Coordinator at Fund Texas Choice, a practical support abortion fund that assists clients with day-to-day logistics, travel arrangements, and support. Sarah also joined We Testify Texas to increase the voice and leadership of people who have had abortions. She will also speak to the intersection of racial justice and immigrant justice with abortion access.
Cristina Parker, Director of Communications at Lilith Fund, grew up in the border town of El Paso as part of a Mexican-American mixed status family. She graduated from the University of Missouri with two degrees, and began an internship through the Dow Jones Newspaper Fund at The Houston Chronicle. Before Lilith, Cristina was the Communications Director at Austin's Grassroots Leadership where she helped shape a new narrative around immigration and criminal justice issues. At Lilith, she helps train community spokespeople and build people-powered media.
Above:  Cristina Parker, Sarah Lopez, and Alice Embree on Rag Radio, March 13, 2020. Photo by Koubou LLC / Rag Radio.
Rag Radio is produced in the studios of KOOP 91.7-FM, an all-volunteer, cooperatively-run, solar powered community radio station in Austin, Texas, in association with The Rag Blog and the New Journalism Project, a Texas 501(c)(3) nonprofit. It is streamed live on the Internet at KOOP.org and Radio Free America. The host and producer of Rag Radio, Thorne Dreyer, is a prominent Austin-based activist and writer who was a pioneer of the ’60s underground press movement. The show’s engineer and co-producer is Tracey Schulz and the staff photographer is Roger Baker; Suzy Shelor is Rag Radio associate; Alice Embree is guest host; and Glenn Smith and Roy Casagranda are our political analysts. The syndicated show is broadcast (and streamed) live Fridays, 2-3 p.m. Central) on KOOP, and is later rebroadcast and streamed on WFTE-FM in Mt. Cobb and Scranton, PA., on Houston Pacifica's KPFT HD-3 90.1, by KKRN, 88.5-FM in Round Mountain,  CA, and at WALHRadio.com in Wilmington, OH -- and as a featured podcast at Veterans Today. Learn more about Rag Radio here.
Running time: 54:04.
Contact:  ragradio@koop.org.